Nothing in our recent history has prepared us for the threat posed by coronavirus. We have all had to make unprecedented changes in how we live, travel and work. As valued supporters of Bicton Arena we wish you and your families the very best for the coming weeks. Stay healthy, stay safe, and we look forward to the day we welcome you all back to Bicton Arena.

With significantly more time on my hands than I would normally have at this stage of the competition season, I thought it might be fun and interesting (hopefully) to write a blog. At this point in time we have no idea when competitions will be up and running again, so instead of trying to look into that elusive crystal ball, I thought I would stop fretting about what I cannot control and explain a little of the behind the scenes “stuff” that we do at Bicton Arena.

I spent Friday 13th March putting out cross country fences and setting the tracks for Bicton (1) Horse Trials. This is one of my favourite parts of my job, as I am sure many people realise course designing is one of my passions. I have spent roughly 4 months obsessing about my courses for the April Horse Trials on paper. Following an extremely wet October International at the tail end of 2019, I had already earmarked bits of ground that I would not be using for April. To be fair, the ground has come back remarkably well, but I am always mindful that we run 3 Horse Trials dates per season, so I am careful where I plan for the tracks to go to utilise the ground to its best potential and allow for repairs.

I usually have a pretty good idea of what I will be designing as I have spent endless hours watching fences and pieces of ground ride, as well as walking potential different bits of ground and looking for new ideas. I then go for a walk with my trusty iPhone which has the “Cross Country App” downloaded on to it. The App maps where I am walking, and I simply drop a pin at each point I envisage having an obstacle. Once I have completed this I can sit down with my laptop in the warmth and comfort of the Office or my sofa at home and edit the tracks using the Cross Country App Toolkit. This is an invaluable piece of kit for me personally as it enables me to play around with distances and number of efforts to see where I am at. 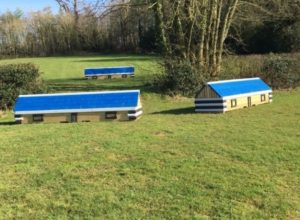 Once I have established where I am going, what the distance will be and the number of jumping efforts, I then make fence lists. I usually do this in Excel and have two columns for each level of track with fence number and then the details of the fence i.e. “Brush Roll”. It can be quite entertaining when Matt goes out to the Park with the fences as my definition of “Log Stack” may be somewhat different to his! We have worked together for many years now, so thankfully he knows exactly what I call each fence, but in the early days it provided much entertainment when I arrived to place a fence with him and had something entirely different in front of me.

Whilst I am formulating my fence lists the danger is that I start getting creative and inventing new fences which need to be built. This is where I get carried away with my colour coding of the spreadsheet as I highlight new builds in a different colour. I use another colour for frangible fences, a different one again for “TBC” (to be confirmed) and so on. By the end of this exercise I hand Matt a very pretty spreadsheet which he looks at and promptly scratches his head. I was excited about unveiling some of our new fences for the April Horse Trials, but alas the unveiling will have to wait until July or October now. In the meantime, I have provided a sneaky peak below:

Now Matt will tell you that this is simply version one and that by the time I have changed my mind several times, what we end with is in fact more likely to be version five or six. I strongly refute such claims, as women never change their mind! What can happen is that when I meet Matt with the telehandler to physically place the fences, I realise that something will not work, or that a different type of fence would work better, so then I make a “small tweak”. This is one of the things I feel very strongly about as a course designer, you must keep your mind open and not become fixated on what you originally had in mind. If I feel something will ride better on a different piece of ground, or with a different profile of fence then I make the changes.

I always say that the night before an event runs, I must be able to sleep soundly. If I am obsessing about a fence in my mind, then it is not right. Many cross country designers are also builders and I although I have gleaned a lot of information over the years in terms of how cross country fences are built, I sometimes I have an image in my head of how I want a fence to look, and then when the practicalities of how it needs to be built are explained to me, I realise why it doesn’t look as I had envisaged. This can lead to me having to compromise on artistic look, but never on safety.

Placing the cross country fences is something I really enjoy. I am not so sure Matt does as apparently I can be quite demanding. If I want it moved two inches to the left and then change my mind and go six inches to the right, this is not unheard of! I love the ideas that come into my head when I am out in the Park placing fences. This is something that will never happen behind a laptop screen or using a phone app. This is what cross country designing is all about. I am so spoilt at Bicton as the Grade One Listed Parkland is so beautiful and we are blessed with topography and natural features that other venues do not possess. It does however mean I have to be more mindful of where fences are situated. The inclines and declines can make a big difference to the severity of the questions I am asking. The other thing I must be very mindful of is running across a camber. It is really unbalancing to run on a horizontal slope, especially for the younger horses and less experienced riders. I always keep in mind how it would feel if I was cantering into a fence that I have set. 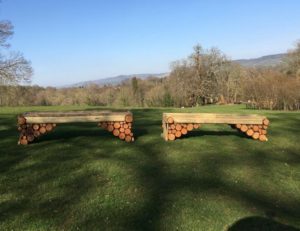 I had placed 80% of the tracks for the April Horse Trials before the season came to a grinding halt, so we had not incurred the costs of anchoring, dressing and flagging the fences. All the fences will now come back in and be stored until we know what the future looks like. If we leave them out in the Park it will kill the grass underneath them and it is much easier to harrow, roll and seed the Park without the fences in the way. The newly painted fences will be covered so they do not fade.

Dressing the fences is one of my favourite parts of the build process. You can transform fences with dressing. A relatively boring, bland fence can look entirely different with greenery, flowers and props. It is also an essential course design tool as we can help horses judge their take off point with appropriate colour to provide face edge visibility, dressing and trees in their eyeline. Wood coloured edges have very little visibility for horses, so you will often see that we have painted the leading edge blue or cream (which they pick out well). Horses are a prey animal and due to the location of their eyes in their head, they have 350 degrees of vision i.e. they do not see immediately in front of them. They also have relatively little binocular overlap (for judging distance), about 60 degrees, which means that we can help them considerably with depth perception by placing Christmas trees, for example, either side and slightly in front of fences.

I hope you have found this small insight interesting. I have focussed on cross country course design given that the Horse Trials were set to be our first major competition of 2020, but I plan to follow this up with an insight into other aspects of the business operation over the coming weeks. Beccy and Gemma are busy sanding and painting showjumping poles as I type, so my next instalment will cover things non-cross country related.