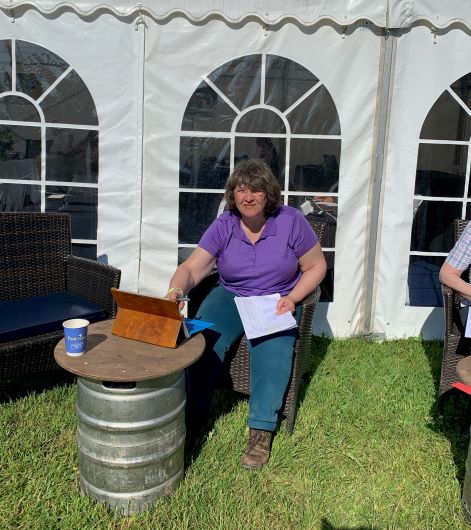 Miranda Collett, the lady behind eventing’s state-of-the-art live scoring programme, is the master of unflappable juggling. As well as Bicton, four other BE events are using her system this weekend plus nine Pony Club competitions, to whom she gives the service for free, and she was fielding questions from Scotland and Cheshire.

Miranda, who lives only 20 minutes away from the Bicton Arena in Devon, was formerly a database manager at the National Lottery Community Fund for 20 years, until taking redundancy eight years ago. She was already a BE scorer when she started work on www.eventingscores.co.uk.

“I wanted a system that would do what I wanted it to do, and it has gradually spread. Last year it became the national system,” she explained.

“I learned from other systems, such as BDWP, but I deliberately don’t do entries, although I work with multiple entry systems which are all uploaded onto the site, basically via an Excel spreadsheet.

“I enjoy the sport and I enjoy the intellectual challenge, but the real satisfaction is in working on something that is usable on the day — my target was to be able to do a 30-second explanation.”

Miranda gives credit to Ian Pearce, PA supplier at Bicton. “Nothing would have happened without him — he finds me wifi in all sorts of greenfield sites. And then there’s Harry Park and Nick Chubb [PA suppliers] — they have all embraced change.”

“The system is constantly evolving. I’ve got two young people listening in to scores, replacing the motorbike score-collectors of old. The riders are the easy part; eventers have always been web-literate.”