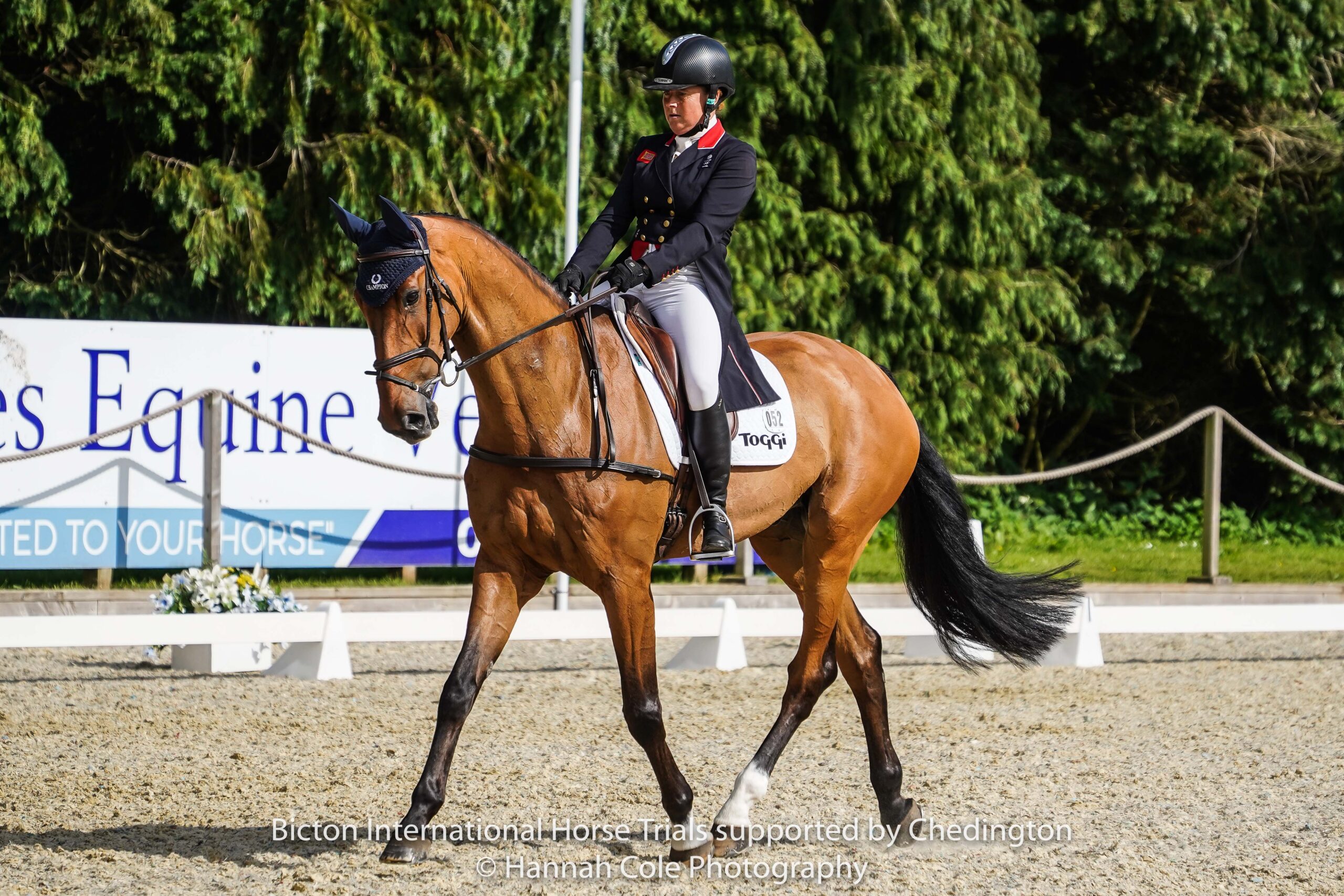 British Olympic longlisted riders Pippa Funnell and Laura Collett have made a flying start at the Bicton International Horse Trials, supported by Chedington, and are leading the CCI*4-L and CCI4*-S competitions respectively after the first day of dressage.

Pippa scored 29.4 on Nick and Barbara Walkinshaw’s upstanding Billy Walk On, just 0.3 ahead of early leaders Laura Collett and Dacapo. The 2019 Badminton winners Piggy March and Vanir Kamira are in close contention, in third, on 29.9.

“It wasn’t his absolute best, but it was definitely a ‘clear round’,” said Pippa, alluding to their mistake-free test judged by Christian Landolt (ground jury president), Annabel Scrimgeour and Tim Downes. “He finds the dressage phase difficult and is quite a shy horse, so I am very pleased with him.”

Pippa described the brand-new cross-country track, designed by Helen West with Captain Mark Phillips as Course Advisor, as: “The course we really need. We haven’t seen anything of this standard for a while [due to the pandemic]. It’s big and hilly – proper stuff – and I hope riders and horses will find it educational.”

Laura Collett riding Karen Bartlett and Keith Scott’s London 52 earned the outstanding mark of 21.0 in the CCI4*-S, in which most of the Olympic long-listed horses are running. The ground jury,  Andrew Bennie (president), Jane Tolley and Anne Keen, placed Alex Hua-Tin second for China on 21.6 with Don Geniro, ahead of British Olympic hopefuls Tom McEwen (Toledo de Kerser) and the world champions Ros Canter and Allstar B, who are in joint third on 23 penalties.

That Laura could achieve such a brilliant score despite a minor mistake when London 52 briefly broke into canter in the half-passes speaks volumes for the superb quality of their performance. “That was entirely rider error, but otherwise I am really pleased,” said Laura of her 2020 Pau CCI5*-L winner, who looks in magnificent condition.

She added: “However, it’s not going to be a dressage competition! The course is seriously beefy, but I am sitting on a good jumper.”

World number one Oliver Townend, who is in sixth place on his dual Kentucky winner Cooley Master Class, agrees: “There are some unusual questions, some old-fashioned questions, and then there are the hills. But I am, so far, in a competitive position and will definitely be giving it a crack.”

“What a fabulous start to our inaugural four-star competition here at Bicton,” said organiser and course-designer Helen West. “It is such an honour to host this calibre of horse and rider, especially in preparation for the Olympic Games in Tokyo.”

Spectator tickets are available for the cross-country on Saturday and Sunday (www.bicton-arena.co.uk) and the competition is livestreamed on Horse & Country (www.horseandcountry.tv). For live scoring and start times, visit www.eventingscores.co.uk