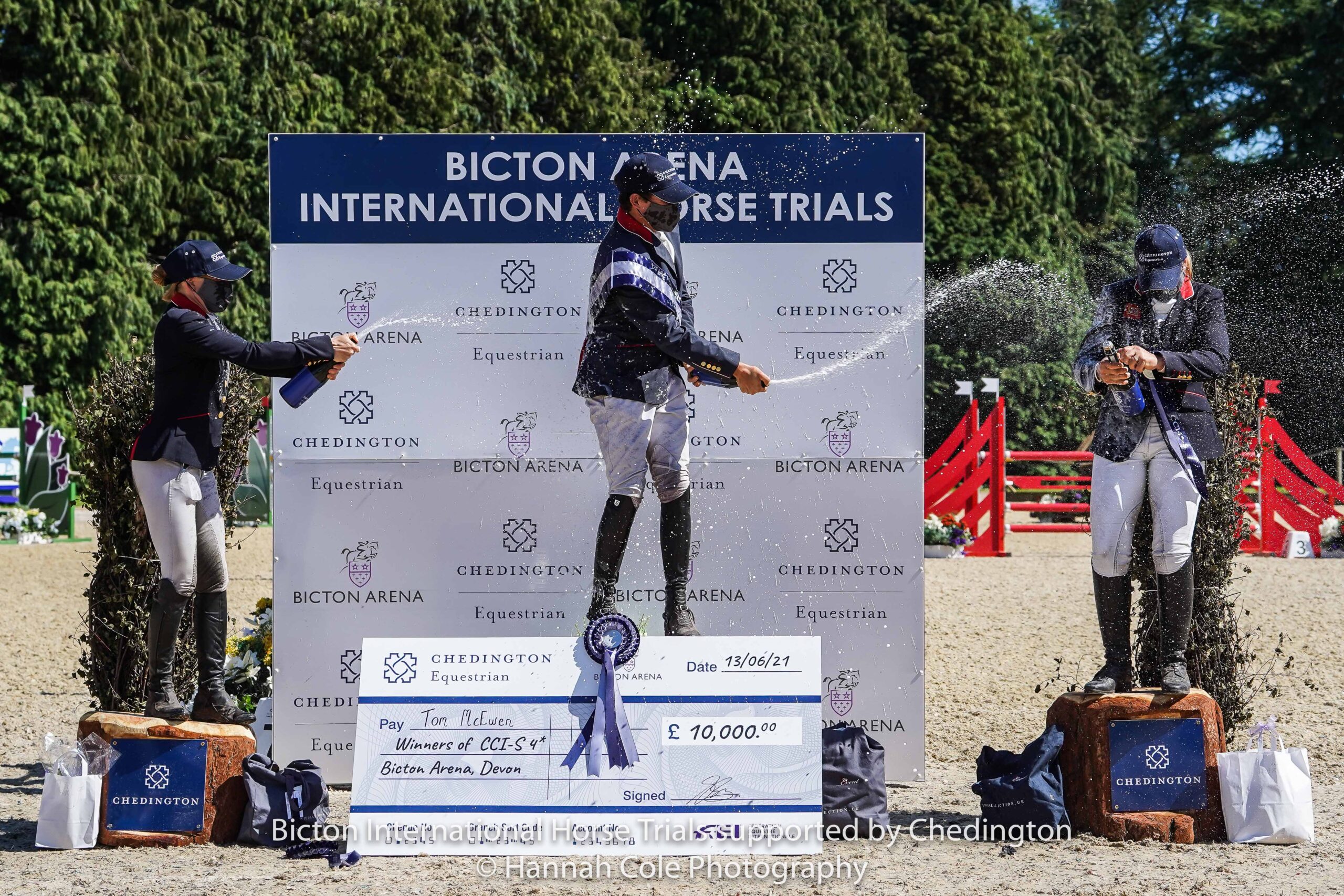 Olympic selectors were given lots to think about — and plenty of good news — in the star-studded CCI4*-S at Bicton International Horse Trials, supported by Chedington, which featured more than 100 starters from 12 nations.

British riders longlisted for Tokyo filled the first five places after the final cross-country phase, with Tom McEwen heading a stellar leaderboard on the much-coveted jumper Toledo de Kerser, owned by Fred and Penny Barker, Jane Inns and Ali McEwen. Tom finished on his dressage score of 23.0, having finished bang on the optimum time of 7 minutes at the culmination of a superb all-round performance.

Kitty King put up a spirited challenge in second place on the striking grey Vendredi Biats, finishing two seconds inside the optimum cross-country time and a mere 0.1 off the winning score.

The world champions Ros Canter and Allstar B made it look easy in third, also remaining on their dressage score, of 24.6. Laura Collett’s run of brilliant form continued with fourth place on London 52 and the world number one Oliver Townend was fifth on his dual Kentucky winner, Cooley Master Class.

The stylish Australian horseman Christopher Burton, who is based at the Dorset yard of the sponsor, Chedington, was, appropriately, the best-placed non-British rider, sixth on the mare Quality Purdey.

There were 40 clear rounds, with nine inside the optimum time, and 66 completions from the 89 cross-country starters.

Tom, 30, who is based at Gatcombe Park in Gloucestershire, has competed Toledo de Kerser, a 14-year-old Selle Francais gelding, at international level for seven years, winning team gold at the 2018 World Equestrian Games and the CCI5*-L at Pau, France, in 2019.

“I am thrilled to bits,” said Tom. “I’ve had several rides this weekend and to pull off such an important result on this horse is amazing really, and shows how special he is.”

“I was delighted with the cross-country. It was just what we needed at this point of the season — there was no hiding behind it — and the organisers had tried their utmost with the going.”

Kitty King joked: “Tom could have been gentlemanly and been a few seconds slower! But ‘Froggy’ [Vendredi Biats] felt brilliant; he has become so much more consistent in the dressage, which is exciting. I couldn’t be more proud.”

Ros Canter’s 16-year-old “Albie” is coming to form at exactly the right moment. “It’s been a long three years for him,” said Ros, a reference to the birth of her daughter in 2019 and then the pandemic. “At the start of the season, he was a little lethargic, but now he really wants to be here and not in the field.”

The Bicton team, led by Helen West, organised this sporting bonanza in just seven weeks, and thanks are due to the Horse Trials Support Group and Event Horse Owners Association, who both provided funding towards upgrading the cross-country, as well as Chedington, whose invaluable support made a CCI4* at this much-loved Devon fixture possible.

“Chedington is delighted for Nicola Wilson, Tom McEwen and Bubby Upton who showed excellence in all three phases to claim the three titles in our first partnered event with Bicton,” said Dr Geoffrey Guy of Chedington.

“Chedington Equestrian are passionate about creating opportunities for horses and riders to train and compete under the best conditions and, this weekend, Bicton has provided an absolutely world-class setting for a very important fixture for horses and riders. Chedington is delighted to have played a part in this and looks forward to working with Bicton in the future to continue to be able to offer the highest calibre of events in the UK.”

“What a fantastic competition we have had,” concluded Helen West. “It has been an absolute pleasure to host Bicton’s first 4-star. There have been some outstanding performances — huge congratulations to all the winners and thank you to all our sponsors, especially Chedington who has been instrumental in awarding our deserved winners an epic prize fund.”